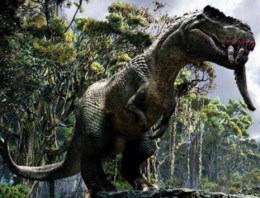 So this is something that i created,called EDB,which stands for Epic Dinosaur Battles,Part.1 means this is the first battle of EDB.

The information about Giganotosaurus:

Carcharodontosaurus is a dinosaur that lived approximately 100 million years ago during the mid- Cretaceous Period. It was first discovered in 1927 by Charles Depéret and J. Savornin in Northern Africa. When it was first discovered, it was originally named Megalosaurus saharicus, but was later changed by Ernst Stromer von Reichenbach to Carcharodontosaurus in 1931. This was done because the teeth reminded him of the teeth of the shark genus Carcharodon. It’s name literally means “shark toothed lizard.”

The original fossils found during the 1930s were eventually destroyed by bombing during World War II and paleontologists had to rely on the written descriptions of these animals. However, that changed when another fossil of this creature was discovered in 1996. This specimen was even larger than the original one was.

Carcharodontosaurus is believed to have been a fearsome predator. It was about 44 feet long, 13 feet high at the hips and could weigh as much as 7 ½ tons. While its huge size gave it a predatory advantage, the really fearsome aspect of this dinosaur is its head. It had a head that was almost as long as the average human male was tall—about 5 feet long—and was filled with 8 inch razor sharp teeth. This allowed it to be the apex predator during its time, easily preying on herbivores such as the Ouranosaurus.

While this dinosaur was likely the top predator in its ecosystem, that doesn’t mean that it didn’t have to compete with other top carnivores. Fossils of this creature have been found in some of the same areas that Spinosaurs and Sarcosuchus dinosaurs were found. Most likely, these 3 carnivores were fierce competitors and had to battle each other for territory.

So a Carchadontosaurus was eating an Rebbachisaurus,then he heard a loud roar,like as loud as a bomb testing siren,then the large male Giganotosaurus appeared,Carcha roared loudly to try and scare the Giga,but it didn't work.Then Carcha and Giga ran to eachother,then the Giga hit the Carcha with it's tail,then the Carcha bit the Giga's tail,and it also bit the Giga's hand,but the Giga defended himself from the other bites,and then he bit the Carcha's neck,the Carcha tried to use his claws to free himself,but it didn't work,and then the Carcha lost a lot of blood from the neck wound,and then,the Carcha died because of losing blood,then the Giga ate the Carcha.

Reason:The Giga was bigger,it had a larger bite force and it basically was faster.

Guys,if you want and EDB Part.2,you can comment down below which Dinosaur would you want to be in the next battle.

For the EDB Part.2,i will only choose the Dinosaurs which you guys want to see,you can't pick 2 Dinosaurs,only 1.

I think Carc would be a bit faster, but because of the slight weight advantage Giga would win a little bit more times than not. Still would be REALLY close though

I promise EDB Part.2 will be longer.

I do like Giga better than Carc, but yet I don't know much about Carc.